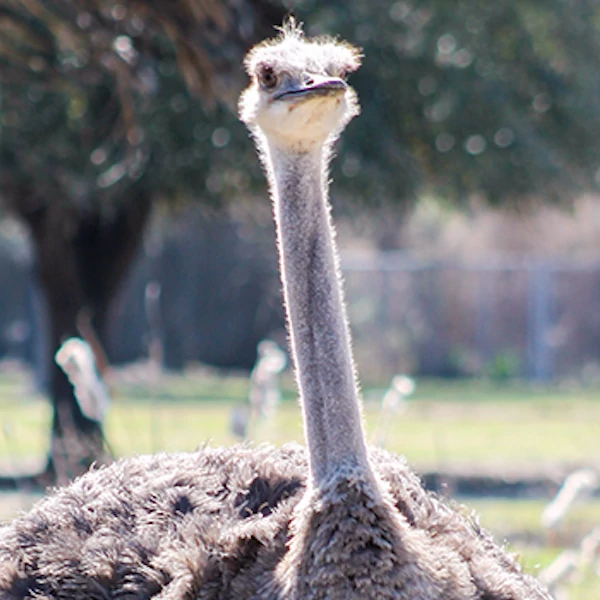 Once ranged through Asia, Europe, and Africa. Its natural range is now limited to Africa's open semi-desert

The ostrich is the largest living bird and second fastest animal in the world. Although it can't fly, the ostrich can make 12 foot strides and run at a sustained speed of 30 mph for 15 minutes or more. It’s also a very good kicker, which could be deadly if an animal is hit by the birds clawed toes on the end of its long legs. This odd looking bird has a small head, large eyes, long neck and short flat bill. Both young and adult ostriches hide by sitting with their heads and necks stretched out on the ground, which may have given rise to the erroneous belief that ostriches bury their heads in the sand.

The most common mating pattern is one male and three females in a family unit. The male usually makes the nest then all the females lay their eggs in the same location. Both sexes incubate the eggs. The dominant female, with her light-colored feathers, will sit on the nest and incubate during the day, while a male bird, with its dark feathers, incubates from late afternoon to early morning. Ostrich eggs are larger than those of any other living creatures. They can be 6 inches long and 5 inches wide, have a shell 5/64 inches thick, and weigh up to 3.5 pounds.

Ostriches almost became extinct in the 19th century because of the demand for their feathers as decorations and accessories. The development of ostrich farms saved them from extinction.