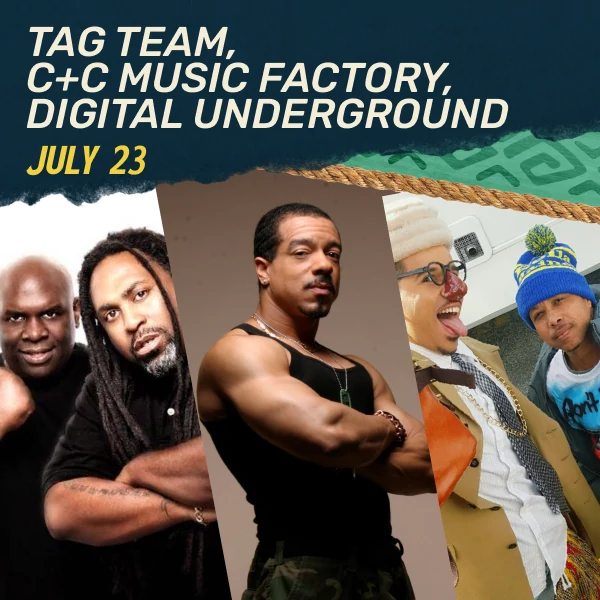 Tag Team - Tag Team introduced their debut single "Whoomp! There It Is" just prior to the summer of 1993. Not too long afterward, DC Glenn (DC the Brain Supreme) and Steve Gibson (Steve Rolln) were #1 on the Billboard R&B chart and at the top of the Billboard sales chart. They sat atop every global chart for the next two years. They became a familiar force in the music business spanning every continent bringing a worldwide appreciation of music from the south. To date, Tag Team has sold millions upon millions of singles and 1.5 million albums worldwide. Through the dynamic duos, many achievements and setbacks they have stayed the course kept the group intact. Steve and DC are still on top of their game performing to audiences globally and look forward to bringing delight to the world through song always! Whoomp, There It Is!

C + C Music Factory - EVERYBODY DANCE NOW! With over 8 million units sold, it was and still is today, the song heard round the world! As the front man and co-founder of the international multi-platinum selling group C + C Music Factory, Freedom Williams has traveled and performed around the world extensively, and has yet to meet a crowd that he couldn't captivate. His performing abilities are just one of the things that keep the crowds mesmerized. Freedom was born in Bedford Stuyvesant in Brooklyn, New York and raised in Queens, New York which is where it all began. Freedom is still captivating crowds around the world and is arguably the most recognizable voice in dance music history but he is also a Hip-Hop force to be reckoned with.

Digital Underground - Digital Underground is a Grammy nominated multi-Platinum American hip-hop group. This legendary act is best known for their hit's: “The Humpty Dance,” “Same Song,” “Freaks Of The Industry,” “Kiss U back,” “Doowutchyalike,” and “I Get Around”with 2 Pac. The group is noted for introducing Tupac Shakur to the music/entertainment industry in 1991. Digital Underground is widely recognized for its unique contributions to hip-hop music, as well as possessing one of the best live performances the genre has to offer. Money B, a co-founder of the group is noted as having one of the most recognizable voices in hip-hop. He has collaborated and helped sell hundreds of millions of records with the likes of Tupac, Bone Thugs N Harmony, Raw Fusion, Ne-Yo, Ice Cube, George Clinton, The Luniz, Public Enemy, and more! Chris Clarke aka Young Hump is the protégé of Shock G and the newest member of Digital Underground. In the Tupac Shakur biopic "All Eyez On Me" Money B plays himself and Chris Clarke plays the role of Shock G/Humpty Hump. Collectively they represent Digital Underground in the film. Musically they have formed to become the official touring and recording representation of Digital Underground.